Years of conservative budgeting practices and an economy that remained open and productive have put Iowa in an enviable position. The state’s coffers aren’t just full; they’re bursting at the seams. Consider the following:

These fiscal years don’t appear to be anomalies, either. Looking further ahead, Iowa’s Revenue Estimating Conference is projecting more revenue growth in Fiscal Year 2023, even with the 2023 tax rate cuts beginning to go into full effect. If the Iowa Legislature continues to fund the priorities of government while maintaining their responsibility to the taxpayer, the balance of the Taxpayer Relief Fund will keep growing. There is an ongoing structural imbalance between what government collects from the taxpayers and what government needs to operate. It is unconscionable for state government to expect Iowans to keep paying high tax rates only to watch these surplus accounts balloon.

It’s time to cut our income tax rates and let Iowans hold onto more of their own money, instead of having the state stockpile what will soon become billions of Iowans’ over-collected tax dollars.

Think of it this way, if Iowa’s surplus revenue for Fiscal Year 2021 were put in one-dollar bills, they would weigh more than an African elephant, the heaviest land animal on earth. If you laid those same dollar bills end to end, they would cover enough distance to wrap around earth’s equator nearly five times. Iowa’s economy is the strongest it has ever been, and with the fastest economic recovery from the 2020 pandemic in the country, it is time to reward hardworking Iowans with a substantial income tax cut that ends what has become a consistent overcollection of their hard-earned money. 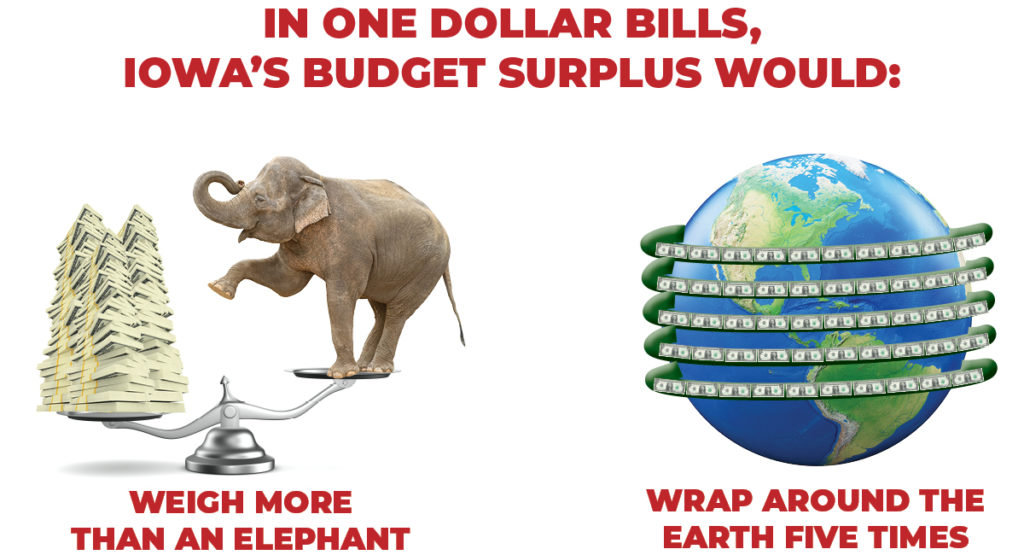 According to the Tax Foundation, Iowa comes in 38th out of 50 for individual income tax competitiveness nationally. Iowa’s income tax rates remain high in comparison to the rest of the country. While the goal of eliminating our state’s income tax to match neighboring South Dakota is a worthy endeavor, incremental progress toward that goal would go a long way to furthering Iowa’s future success.

The tax reform passed in 2018 has seen rate cuts phased into our tax code for the past several years. Not only has Iowa been in a position to fully absorb those cuts, but Iowa’s revenue is still projected to grow even as the full slate of reductions go into effect. Lawmakers have helped ensure that Iowa’s government does not grow faster than Iowans’ income. Now they must deliver the spoils of that effort to Iowa’s taxpayers. Iowa’s House and Senate should work to make the largest tax cut in Iowa history look small by passing permanent and substantial rate reductions in 2022.

It’s time to end the massive overcollection of Iowans’ money and cut our rates. Anything less than a major tax cut is a slap in the face to every Iowa taxpayer.