Contract lobbyists are hired by:

Lobbyists contracted by local governments are not subject to open records laws.

Sometimes, the positions taken by taxpayer funded lobbyists are not in the best interest of the taxpayers.

Contract lobbyists paid with taxpayer dollars and associations of local government hiring lobbyists should be subject to the same open records laws as public employees.

Work Left to Do:

Contact legislators and remind them not to forget taxpayers when funding the desires of government. 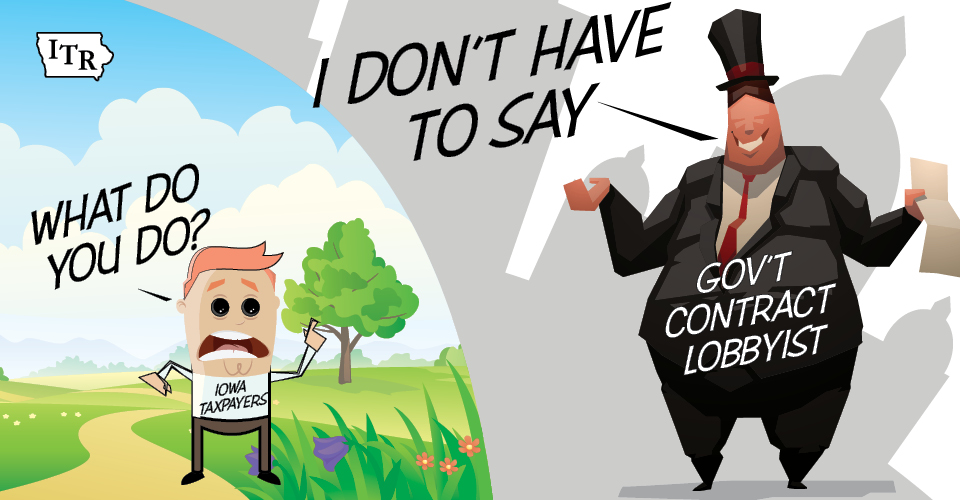 Are they really working in your best interest?

Did you know your property tax dollars are used to lobby legislators? Not only this, but you may never know exactly what taxpayer-funded lobbyists are promoting. Holding local elected officials accountable for the efforts of their lobbyist is difficult, particularly when they work with legislators behind the scenes.

Many cities, counties, and school districts hire lobbyists. Other lobbyists are hired through associations and organizations like the Iowa League of Cities. Dues for, and training through these organizations, are paid for with your property tax dollars. It’s challenging to determine exactly how many property tax dollars are funding lobbying because the communications between local governments and their lobbyists are not transparent.

If property tax dollars are paying for lobbying activities, taxpayers deserve to know exactly how that money is being used.

Lobbyists must declare official positions, and those are public record; however, much more happens behind the scenes than an official position indicates. There are talks to draft legislation which sometimes go nowhere. There are also internal discussions to decide what lobbyists support or oppose. Citizens deserve to know what local elected officials are using their money to advocate for or against because sometimes, the positions taken by lobbyists representing local governments or associations of local governments take stances that are not in the best interest of the taxpayers.

Contract lobbyists paid with taxpayer dollars and associations of local government hiring lobbyists should be subject to the same open records laws as public employees. The people deserve the opportunity to learn how their money is spent and determine if that use is genuinely in their best interest. Citizens must have transparency to be able to hold their local governments accountable.