Transparency, citizen input, and local government accountability will all be increased when the Governor signs this bill.

This week, both chambers of the Iowa legislature passed a monumental property tax transparency bill.

The reform does the following:

Requires cities and counties to pass a resolution that identifies the maximum amount of property tax dollars they are going to collect in the next fiscal year and hold a public hearing on that resolution.
Calls for the public hearing to have very specific budget/property tax disclosures, including a statement of the major reasons for increased property tax dollars to provide taxpayers with additional information. This hearing also gives local taxpayers the opportunity to submit objections to the proposal.
Requires a local government vote to increase their budgets. A simple majority is required for approval; however, a two-thirds supermajority is required for increases above two percent.
As Representative Gary Carlson succinctly stated during debate last night, "This bill opens up the communication channel to let taxpayers know a decision was made to increase taxes. If a city council or supervisors feel like they need more than two percent, then they vote on it."

Representative Dustin Hite, who managed the bill in the House, echoed that theme by explaining the bill requires "…a few more steps to make sure the public knows what is going on. How levy rates and valuation will affect their tax bill."

Senate Ways and Means Chairman Randy Feenstra managed the bill in the Senate. He said, “This is an opportunity for the taxpayers of Iowa to have some ability—some way they can reach out and have some say in what their property taxes should or should not be.”

Other states have proven that increased transparency and local government accountability has made a difference. This bill provides a framework that empowers citizens with a seat at the table as local governments make their budget decisions.

ITR President Chris Ingstad said, “When the first public hearing of property tax reform was held in March, Iowans for Tax Relief advocated that an open conversation between local government and their constituents is needed. This bill accomplishes that goal. Transparency, citizen input, and local government accountability will all be increased when the Governor signs this bill.”

Since 2000, total property tax revenue has increased over 100%. Over that same time, population growth and inflation have combined to increase by 56% and the cost-of-living adjustment (COLA) provided to Social Security beneficiaries has only increased by 46%. 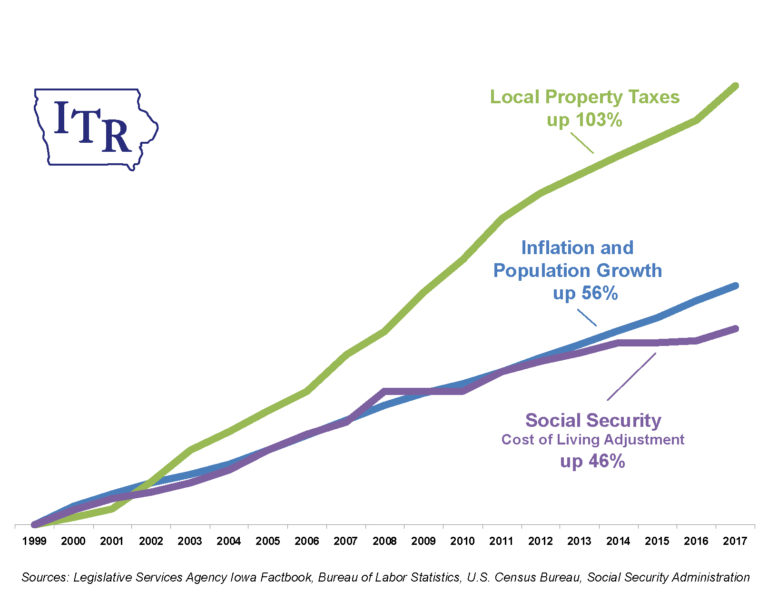 Your Voice Was Heard

ITR gives Iowa taxpayers the tools to communicate with lawmakers. Through emails, phone calls, and letters to the editor, all of you helped this reform happen. Thank you!

We also applaud the legislators who listened to the concerns of so many Iowans and took action to deliver property tax reform. Whether it was retirees, small business owners, or young families, ITR’s members had overwhelmingly identified property tax reform as their top priority this year.

While every legislator who voted in favor of this reform deserves recognition, ITR is particularly appreciative of the leadership shown by: