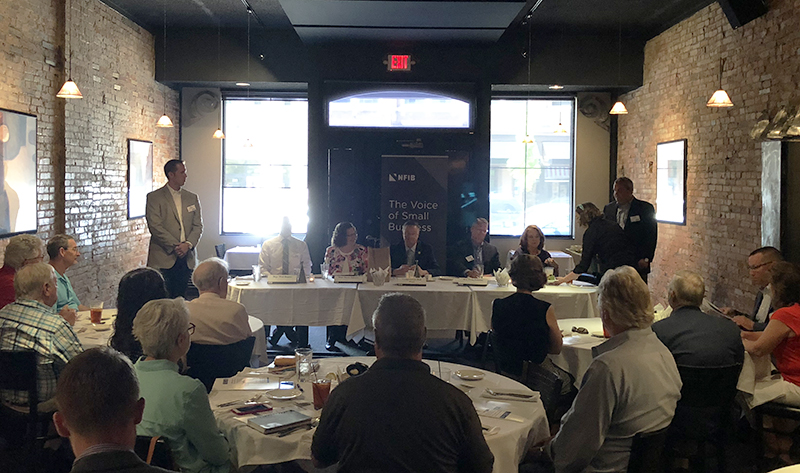 Congressman Blum said, “America has the finest entrepreneurs and small business people in the world. Get off our back with excessive regulations. Get out of our back pockets with excessive taxes. Five years ago, reducing taxes was number one on my list. We had the highest corporate tax rate in the developed world. We followed through, in spades, in reducing taxes. Now we can be competitive with the rest of the developed nations. Every business I talk to in Eastern Iowa, small, medium, or large, is buying and investing in capital expenditures in plant and equipment.”

When discussing bills passed by the Iowa legislature the last two years, he said, “I couldn’t be more proud of my state’s legislators. Hats off to you.”

Iowa’s newly-passed tax reform was a heavy lift because of recent tight budgets and this reform is a good step in the right direction. It will allow Iowa families and businesses to keep more of their own money. As the state continues to grow and Iowans do better, there is more work to be done. Iowa needs to continue to reduce the tax burden for everybody. Iowa legislators had this to say about the reform:

“The initial tax reform bill is just one step. We are going to continue to fight to make sure tax reform is uniform and fair across the board. People keeping more of their own dollars will help Iowa’s economy.” – Rep. Walt Rogers

“The rest of the tax cuts in the bill are dependent on triggers. If we don’t meet those triggers, a lot of the good provisions are not going to go into effect. I would like to see us lower the trigger thresholds, so we will have a better chance of being able to get the whole bill into effect.” – Rep. Sandy Salmon

“The government likes to take in more and say they are going to do more. But I would ask, are you getting your bang for your buck? I think the government has failed to recognize that small businesses are out creating jobs.” – Sen. Craig Johnson

“I am glad to see Section 179 did make it back and will be coupled. That will help Iowans.” – Sen. Annette Sweeney