The Iowa legislature has understandably been undertaking the difficult process of de-appropriations since the session began.  It is never easy to make cuts to the budget in the middle of a fiscal year, however, that is what must occur since our state’s spending is growing faster than our state’s revenue.  But just because committee work and floor debate has been focused on immediate budget issues, that doesn’t mean work is not being done on the important topic of tax reform.

Iowans for Tax Relief continues to work with legislators and other allies at the Capitol to deliver not just tax reform, but true tax relief to all Iowans.  We have had many positive discussions centered around the best path forward for Iowa and we believe that actual legislation reflecting some of those options will be released soon.  Tax relief can only be achieved while keeping a watchful eye on spending.  Priorities will have to be identified and serious discussions will need to take place about how to reduce or at least slow the growth of spending.  Iowans need a plan that lowers rates and reduces the tax burden so they can keep more of their own money in their own pockets. 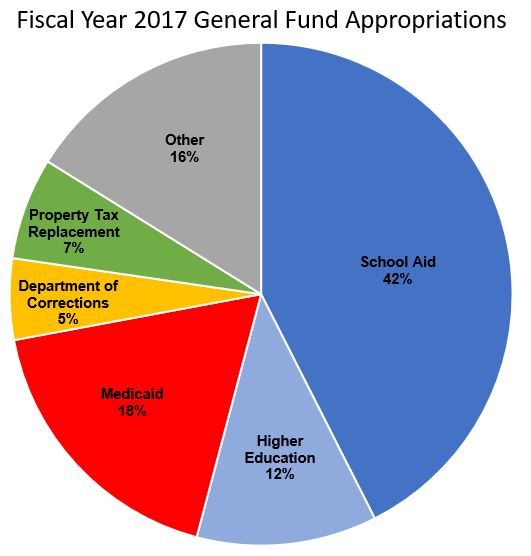 Of the six categories, Education had the largest dollar increase since FY 2008. School Aid increased $735.2 million or 3.1% over that time period. Medicaid spending grew $521.7 million. This is a 5.8% increase over the 10 years, the fastest rate of increase of the categories listed.

Over half of one major category, Property Tax Replacement, has only existed since FY 2015. The Commercial Property Tax Act, enacted in 2013, reduced commercial and industrial property taxes over a four-year period (FY 2015 to FY 2018). To compensate for local government lost revenue, the state “backfills” to make up the difference. Combined, the Commercial and Industrial Property Tax Replacement ($152.1 million) and the Business Property Tax Credit ($125 million) totaled $277.1 million in FY 2017. As ITR said in a Cedar Rapids Gazette guest column, it would be prudent for policymakers to review the property tax backfill, and make revisions to this policy if needed. Many counties’ property tax collections actually have increased even when the backfill is not taken into consideration.

Lawmakers need to remember government spending is not the solution for economic growth, nor can government solve every policy problem. Several states have demonstrated lower levels of spending and taxation not only lead to economic growth, but also the ability to adequately fund the priorities of state government.

Senate Majority Leader Bill Dix said, “The objective has always been the same – for more money to be kept by those who earn it.” We agree it’s the people’s money, not the government’s.

Over $440 Million Reasons to Control Spending

During the last legislative session, the Iowa Senate passed Joint Resolution 9, a spending limitation constitutional amendment. This measure would “limit the annual increase in spending from year to year to the lesser of 99 percent of the estimated revenue for that fiscal year, or 4 percent above the prior year’s revenue.”

Fiscal analysis of Joint Resolution 9 by the Legislative Services Agency (LSA) applied the rules of the resolution to the past ten legislative sessions and they found that “appropriations would have been lower than the enacted appropriations in seven of the fiscal years.”  State Senator Charles Schneider wrote the LSA analysis “shows that if the spending limit had been in place since fiscal year 2012, state government could have spent $488.2 million less than it has.”

Taxpayers deserve better constitutional protections against the unquenchable appetite for government spending. Families and businesses across Iowa often must make difficult budget decisions on a regular basis. Seldom does government, at any level, say that they can function with less, it is always more and more funding.   Read more

Lowering tax rates and reducing spending is a formula that will lead to economic growth in Iowa. As legislation is considered at the Capitol in subcommittees, full committees, or on the floor of either Chamber, Iowans for Tax Relief will register for, against, or undecided on bills based on how the bill impacts Iowa taxpayers.  Email itr@taxrelief.org to share your opinion. We welcome your input.

Since federal tax reform has taken effect, many Iowans have more money in their paychecks due to less federal tax withholding.

This article by Forbes explains the changes and takes a look at the new withholding tables. The IRS withholding calculator should be available by the end of February.